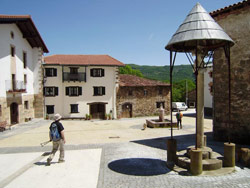 Saragüeta, in the Arce Valley, is synonymous with tranquility, silence, nature and relaxation.

We occupy a small viewpoint of the Sierra de Labia, from where we can contemplate emblematic peaks such as Larrogain, Elke or Corona. It is, perhaps, one of the less known valleys of the Navarrese Pyrenees and perhaps that’s the reason why it preserves the ancient architecture of the area and an unquestionable scenic beauty.

Only ten of us usually live here. We deeply love this place, its calm, the contact with the land, the respect for the animals that have represented the sustenance for many years in these valleys. 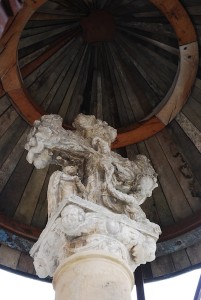 The village consists of a few houses in the Pyrenean style, arranged around a beautiful square and a two-spout fountain, whose water comes from several springs. Right there, under a calvary, you will be able to admire a sixteenth-century transept, with considerable artistic value. It has an expressive crucifix, accompanied by the Virgin with St. John and a third kneeling figure. It is also worth visiting the old washing place, recently restored, on the way out of the village, which point to the ways of life of our ancestors. 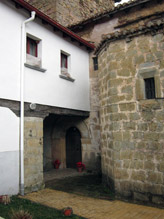 The Church of San Juan Bautista

It is of medieval origin and you will find it in the centre of the village. The doorway, with a semicircular arch, is dated in the 16th century. Inside, you can see elements of various styles: a simple baptismal font of medieval origin; a Gothic crucifix from the 14th century; or an altarpiece dedicated to St. John the Baptist, a 19th century Neoclassical, whose sides were used for some small Renaissance paintings.

Saragüeta, incredibly, has been a movie set. It was here that Montxo Armendáriz shot, in the year 2000, a good part of the scenes of his film “Broken Silence”. The film, played by Lucía Jiménez and Juan Diego Botto, showed life in a small village after the Spanish Civil War. The director said in an interview: “We went all over the mountains of Extremadura, the mountains of León and Asturias, the Maestrazgo and Valencia, but in none of these areas did we find a village with the characteristics described in the script, as it had to meet very specific requirements: to be between mountains and have an unpaved square that we could adapt to the forties, and where we could also build a bar-shop of the time”.. 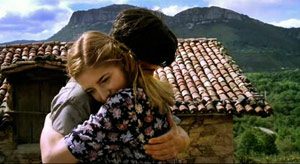 Saragüeta will allow you to combine nature tourism with surprising manifestations of rural art in the nearby villages. From mountain escapes to family walks to admire artistic jewels such as the hórreo de Lusarreta or the chapel of Santa María de Arce. You are very close by car to Orbaizeta, one of the entrances to the Irati Forest, to Jacobean landmarks such as Roncesvalles, and to other beautiful valleys such as Aezkoa or Erro.

LThe nearest services are in Nagore (ten minutes by car), capital of the Arce Valley. You are also within easy reach of Auritz/Burguete (ten minutes) or Aoiz (twenty minutes). Here you will find food stores, pharmacy, gas station, etc.
FOR MORE INFORMATION:

www.valledearce.com
(On this website, you will find lots of cultural, historical and artistic information about the valley, thanks to the documentary work of Jose Etxegoien).