Roman road from Saragüeta to Espinal

Linear stage between our rural house in Saragüeta and the Espinal Campsite by the Alto de San Paul where we will pass from the municipality of Arce to the neighbor of Erro. Marked in lilac and white although it is formed unevenly, essential GPS. We will pass through the area of the Roman milestones that confirmed the presence of this road

We describe the route from our accommodation, always foreseeing a second car in Espinal at the level of the Urrobi campsite. Starting from our rural house, we will look for the high part of the village where we will see at the height of the old interpretation centre of the film “Silencio roto”, today the house of the Council, the posts of the Roman road with its two options: we will follow on the right the option towards the Alto de San Paul, signposted on the post. Following the old roads between villages, the path is wide and clear and runs along the sunny side, on the slope of the base of Mount Larrogain and the Peñas de Aintzioa. After passing a stream and several langas by anti-cattle pass, we will enter the town of Lusarreta, a village that we will see at our feet with several options of path to descend to it. We will follow the main path without shortcuts, then a path, until the confluence with the Alto de San Paul (upper image). Panel of the Roman road.

At an important crossroads we will follow the option of the signpost to Espinal, for 1 km parallel to the wire fence separating the valleys of Arce and Erro. Then we will pass this wire fence and we will continue circumventing by the East the Alto de la Borda, (long section by forest with more spaced marks, recommendable track GPS) In a moment of the forest we will leave the deflection to the cave of Lezestali and we will follow with the undulations of the land until we plant us in a wide track, place where three Roman milestones were found that would indicate the presence of this Roman communication route. At about 4 km from Espinal and skirting the Berregu mountain, we will only have to drop down this wide track to the vicinity of the curve between Burguete and Espinal where we will meet the PR Berregu Bidea (orange marks). Following this double signposting, lilac-white of the road, and orange of the PR, we will reach the pine forest next to the road, the panel of paths of Erro and the last panel dedicated to the construction of roads by the Romans. 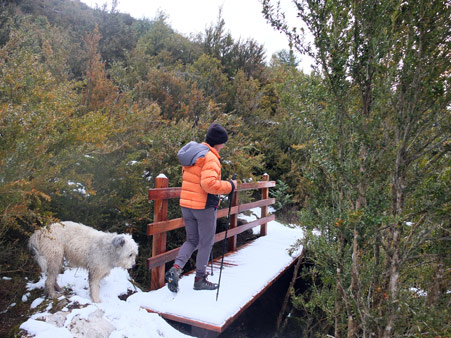 The path has been conditioned with some new wooden bridges like this one.