A perfect route for families, which descends from Saragüeta through the ravine of a regatta and finds the course of the river Urrobi and the NA-172. In the ascent, we will go up the right bank of the Arangoa regatta to reach the village again at the level of its washhouse. With children, from 6 years old.

On the occasion of the construction and filling of the Itoiz reservoir, several marked routes were made through the valley by the now extinct Itoiz Foundation/Canal de Navarra. The lack of maintenance of these paths led us to mark them out and maintain them on our own. It is a marking in its own orange colour, not homologated, but perfectly valid so as not to get lost and to be able to orientate oneself on the ground. We renamed it Baratza Bidea or Camino de las Huertas. The new name responds to the toponym that exists in the lowest part of the route, where the Arangoa race flows into the Urrobi River.

We will leave from Casa Monaut by the path in front of our house and look for the orange marks that lead us south along the Camino de Urdíroz, parallel to the old path in this town (they are different). In a moment we will leave the path to Larrogain and Urdíroz to turn left and lose height clearly looking for the bottom of the valley and the crossing of the river Urrobi. There are remains and metal stakes of the SL-NA29 Ruta de los Maquis, which help us in some sections.

We will pass a gate (close it, because we have loose cattle) and then a first anonymous race to climb a ramp and then descend without problems to the cliff head of a race. This stretch is the steepest of the excursion. It even has some steps on some ramps to help the descent. If the weather has been very rainy, we recommend that you take the route in the opposite direction to this description. After the “complicated” section, we will almost reach the Urrobi riverbed next to the old Roman bridge that was broken (caution, fall into pools). This is the bathing area for the villagers, which you can also enjoy in good weather. We will continue parallel to the riverbed, going up it for a short stretch until it finally flows into the valley road NA-172. We will advance until we pass the P.K. 21.

We will continue a few hundred metres along the verge, carefully, to take the next detour signposted with flirty wooden signs to Saragüeta. We will then go up the Arangoa river on its right bank without any problem, on a very comfortable path, with a very gentle slope and interesting stretches of riverbank vegetation. It is the same race that begins in the rocks of Larrogain and whose high zone is already described in the ROUTE TO THE LARROGAIN MOUNTAIN. A little less than 200 m from the village, we will cross the stream at last to the other bank. We will reach the access road, which we will follow for a few meters and take the first cement ramp, the one from the old wash house (recently restored), until we enter the village again and look for Casa Monaut. 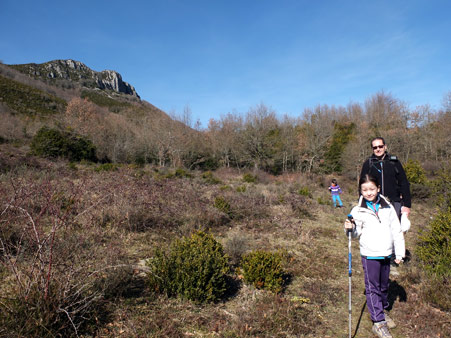